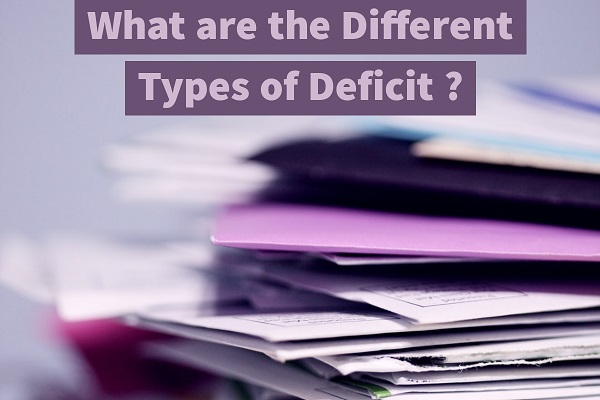 What are the different types of Deficit ?

A budget deficit occurs when an organization or government does not earns enough revenue to cover its expenditure.

There are a number of types of budget deficits – like Revenue deficit, Fiscal deficit and Primary deficit.

A budget deficit is not healthy for the government/organization as this means that additional funding will be required to balance the deficit, for which interest will have to be paid in large sums.

The solution to a budget deficit for a government would be to increase taxes, find new revenue sources and reduce government spending.

Revenue deficit is (and can be defined as) the excess of revenue expenditure over revenue receipts.

Receipts in the revenue account comes from different types of direct and indirect taxes and also from non-tax sources such as interest received on given loans, dividend and profits of public enterprises.

The expenditure in revenue account includes items of collective consumption of the society which creates no earnings assets. These expenditure are –

Revenue deficit represents -ve savings or dis-savings of the government which leads to lower investment by the government and causes slowdown in economic growth of the country in the long run.

Government borrowing to meet revenue deficit does not lead to increase in durable assets and therefore does not cause expansion in productive capacity for sustained economic growth in future.

Fiscal deficit is (and can be defined as) the excess of total expenditure (both on revenue and capital account) over revenue receipts and non-debt type of capital receipts (such as recoveries of loan).

Fiscal deficit is created when government’s total expenditure exceeds its receipts from taxes and other non-revenue and non-debt capital resources.

Fiscal deficit can be financed by the government in two ways –

First, through borrowing by the government from the market (both inside and outside of the country). On this borrowing government has to pay interest annually and also the borrowed amount at the end of the maturity. Government borrowing from the market to finance its fiscal deficit adds to the public debt and increases burden on the future generations on whom heavy taxes have to be imposed for repaying the loans.

Second, the government can finance its fiscal deficit by printing new money or borrowing from the Central Bank which issues new notes against government securities. This new printed money to finance fiscal deficit results in expansion of high powered money in the economy which may cause inflation if not checked.

Primary deficit is a measure of budget deficit which is obtained deducting interest payments from fiscal deficit.

Interest payments on public debt are the transfer payments made by the government.

Financing the fiscal deficit by issuing new money through borrowing by the government from the Central Bank (RBI in India) against securities is called Monetisation of Fiscal Deficit or Money Financing.