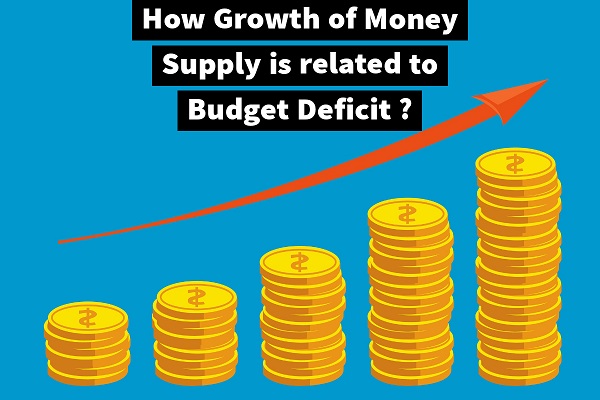 How Growth of Money Supply is related to Budget Deficit ?

There are two possible links (or relations) between budget deficit and growth of money supply.

First, the budget deficit that is financed by borrowing by the government from the market reduces the supply of money for the private sector in the short run which causes market rate of interest to rise. Higher interest rate causes decline in the private investment or we can say that crowds out private investment.

If the Central Bank is following the policy of  targeting interest rate, then to prevent the interest rate from rising it will increase the money supply and to do that it will by a part of the bonds or securities issued by the government, this is generally called accommodating the deficit.

Second, is the deliberate policy of the government to finance the budget deficit by the use of printing high powered money. In this method the government itself may print new money or in some countries Central Bank can print money independently.

When the Central Bank buys government bonds or securities on its own to accommodate the budget deficit and to prevent the crowding out effect on the private investment, It results in the growth of the money supply in the economy.

So, When the government follows a deliberate policy of printing high powered money to finance its deficit it leads to the growth in money supply in the economy.

When money stock grows at a greater rate than the increase in the output, it may cause inflation. So, the risk of inflation acts as a constraint on printing new money to finance budget deficit.