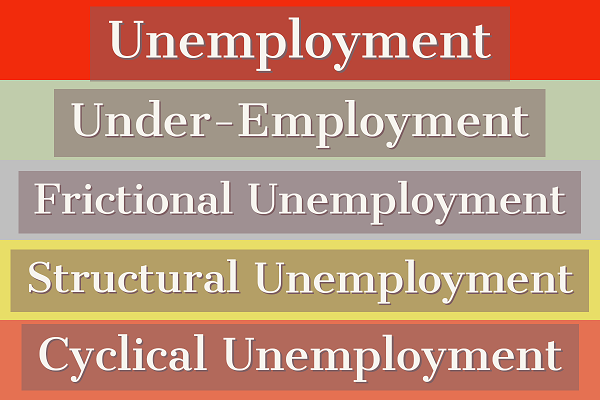 Unemployment is defined as a state of affairs in which there are a large number of able bodied persons of working age who are willing to work but cannot find work at the certain wage levels in an economy.

People who are either unfit for work for physically or mentally, or do not want to work are excluded from the category of unemployment. For example – sadhus.

Engaging in some productive work or occupation does not necessarily mean that they are employed or the absence of unemployment.

Underemployment is also a state in which people are partially employed or are engaged in inferior jobs, through they can do better jobs, are not adequately employed.

Mainly there are three types of unemployment –

Fractional unemployment is a type of unemployment in which prevails in the economy among workers who have voluntarily quit or left their previous jobs and searching for new better jobs or looking for jobs (employment) for the first time or those who had re-entered the lab our force for some time. They are said to be between jobs.

Fractional unemployment arises due to the lack of information about availability of jobs and lack of perfect mobility on the part of workers.

Fractional unemployment is also called Voluntary Unemployment, because people themselves choose to quit their current jobs for new better jobs.

Structural unemployment is the mismatch between the unemployed persons and the demand for specific types of workers for employment because the demand for one kind of labour is expanding and for another kind is declining either due to changes in the structure (composition) or due to the changes in the technology taking place in the economy.

Structural unemployment is also caused by the mismatch between the location of job vacancies and the present location of the unemployed workers.

The main feature of structural unemployment is that the unemployed workers lack skills required by the expanding industries.

Natural rate of unemployment arises due to the labour market frictions and structural changes in the free market economies.