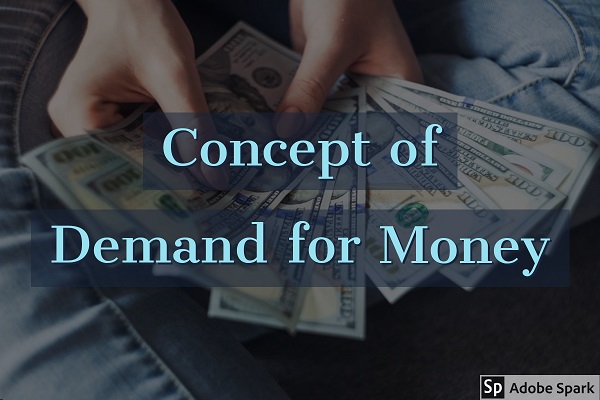 Concept of Demand for Money –

According to the classical economists, money serves only as a medium of exchange and people demand money to buy goods and services and also to make payments or for transaction purposes.

But according to Keynes, money is an asset and people wants to hold money to take the advantage of changes in the price of this asset which is the rate of interest.

Keynes also laid stress on another motive to hold money which is speculative motive which means people demand money to take advantage from the future changes in the rate of interest.

Another important point about demand for money is that what people want is not the nominal money but the real money. This means that they are interested in the purchasing power of their money holdings which is the value of money in terms of goods and services that they can buy with it. So, the people wouldn’t be interested in only nominal money holdings irrespective of the price level.

If people are only concerned with nominal money holding irrespective of the price level, they are said to suffer from money illusion.

To clarify this concept many economists have put forward their theories. Some of these theories are

According to the Fisher, money serves as a medium of exchange, which people demand to buy goods and services and also for transaction purposes.

According to the Fisher’s Transaction Approach, demand for money depends on the three factors –

a. The number of transactions

b. The average price of transactions

c. The transaction velocity of circulation of money.

3. Keyne’s Theory of Demand for Money –

This theory is also called Liquidity Preference Theory. Liquidity preference means the demand for money to hold mostly by the public.

According to the Keynes theory, people demand money for three purposes which are

a. For Transactions Purposes

b. For Precautionary Purposes

We will be explaining these theories in details later in our coming blog posts.