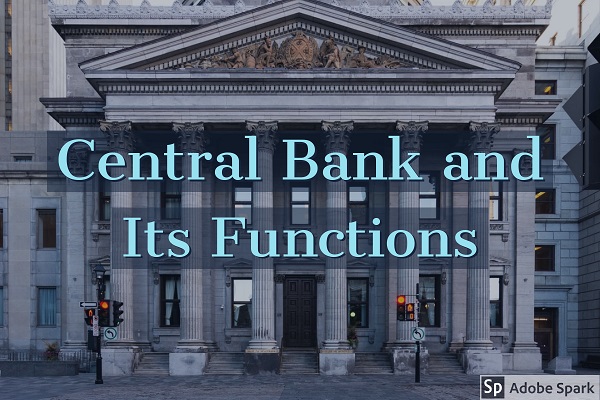 Central Bank and Its Functions –

Central bank is an apex body or institution of the monetary system which regulates the functioning of the commercial banks of a country.

Central Bank is the apex monetary authority in the monetary system of a country.

The central bank of India is called the Reserve Bank of India which was established in 1935.

The Central Bank of a country has a special status in the banking system of a country. The principle on which a central bank works is different from the principles that other ordinary banks follow.

The ordinary or commercial banks works or exists to make profits. While a central bank works to promote the financial and economic stability of the country.

So, the main principle of Central bank is to maintain financial and economic stability in the country. Everything else is considered secondary.

The central bank of a country has the monopoly of issuing currency to the public. Central bank controls the supply of currency in the country.

In the past central banks of the countries used to keep the reserves of some gold and foreign currencies against the issued currency notes. The percentage of the reserves was fixed by law and could be changed by the government. This was Proportional reserve system, means that the currency notes can’t be converted into gold or silver.

In 1957 India abandoned the Proportional Reserve System and adopted Minimum Reserve System. In this new system the Reserve Bank of India has to keep only a minimum amount of reserves in the form of gold and foreign currencies or exchange securities and with this minimum reserve it can issue any amount of notes or currency.

# From the economic point of view what matters most is the production of real goods and services and not the amount of gold reserves supporting the currency. The real value of a currency depends on how much how much it can buy not how much gold or silver is kept as reserves against it.

# The credibility of the currency of a country not on whether it is convertible into gold or silver but on to what extent it is possible to maintain the stability of its value by suitable monetary control.

2. Banker to the Government –

Central bank acts as a banker’s bank in three ways

# as the lender of the last resort

# as the bank of clearance, settlement and transfers.

All banks in the country are bound by the law to keep a fixed portion of their total deposits as reserves with the central bank. These reserve helps the central bank to control the issue of credit by commercial banks.

The central bank is the lender of the last resort for the other banks in difficult times when there is no hope of getting help from anywhere.

The main function of the central bank is to maintain financial and economic stability in the country.

The main reasons of financial and economic instability are inflation, deflation and trade cycles which are caused by the change in the overall economic activities which in turn caused by the changes in the aggregate demand, especially the investment demand, which depends on the supply of money. The supply of credit affects the supply of money in the economy, which affects the prices, national income and employment by changes in the investment demand.

There are different ways by which the central bank can control the supply of credit in the economy. For example –

# by varying the bank rate

# by changing the reserve ratio

5. Lender of the last resort –

The commercial banks works on the basis of fractional reserve system. This can create problems if the demand for cash by the depositors increases, its reserves won’t be able to fulfill the demand for cash. In situations like this central bank comes as a lender of the last resort and provides assistance to the needed banks.

This is also an important function of the central bank of a country.

For example, the Reserve Bank of India has the responsibility to maintain the exchange value of the rupee.

When a country adopts flexible exchange rate system, then the value of its currency is determined by the demand for and supply of a currency, or we can say by the market forces.

The value of a currency is its exchange rate with other currencies, which fluctuates rapidly and is harmful for the economy.

In these situations, it is the responsibility of the central bank of the country to prevent the large depreciation or appreciation of the nation’s currency.