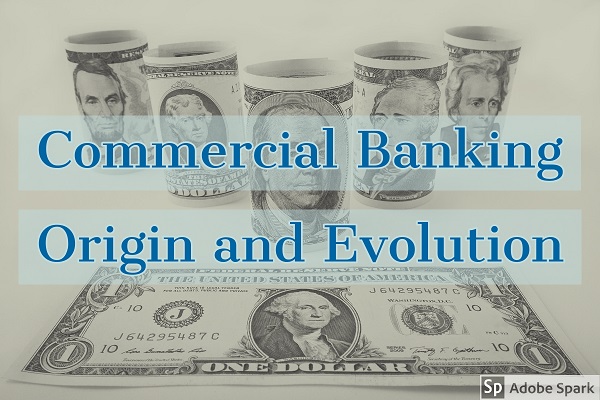 It is a business organization which borrows and lends money, and makes profits in the process.

A commercial bank increases its resources by borrowing from the public in the form of deposits and lending to the businessmen. The lending rate of interest of commercial bank is greater than it pays to the depositors, that’s how it makes profits.

Origin and Evolution of Commercial Banking –

The credit of its origin goes to the goldsmiths of the England. In the seventeenth century, goldsmiths in England possessed the strongest safe vaults where valuable goods like gold, silver, diamonds could be kept safely. So, the rich people in England at that time used to keep their valuable things with the goldsmiths and got receipts from them for their deposits of gold or silver or other valuable things.

At a later stage it was observed that these deposits with goldsmiths could be used as money as a medium of exchange. The person who had deposits of gold and silver with a goldsmith could pay of his debt by endorsing the deposit receipt in favor of the person to whom he has to pay back the loan. In this way gold and silver got automatically transferred to another person even though the gold and silver remained in the safe vaults of the goldsmiths.

It was soon realized that there was no need to for endorsing the whole deposit receipt in favor of the other person. With the deposits of gold or silver or diamonds a person could issue a letter to his goldsmith instructing him to transfer a certain amount of gold or silver to another person. Cheques are the modern version of this process.

There was another development when goldsmiths realized that a good amount of gold deposited with them remained idle for long as only the ownership of gold or silver changed through transfer. From this they concluded that they could issue more deposit receipts than the actual deposits of the gold and silver with them to meet the financial needs of persons and started charging some interest on them. This was the beginning of creation of deposits or credit.

Balance Sheet of a Bank –

Balance sheet of a bank is of great importance to understand the sources and uses of its funds.

A balance sheet of an institution indicates its assets and liabilities or we can say its financial health.

Deposits are the liabilities of the banks as they are depositors claim against the bank.

Deposits are of mainly two types

1. Demand Deposits – Demand deposits are payable on demand and can be withdrawn by the public through cheques.

2. Time Deposits – The time deposits are repayable by the bank only after a fixed period of time.

In India, there is another type of deposits called Savings Bank Deposits. Money in these deposits can be withdrawn by cheques, but there are limits to the amount withdrawable in day or a week or a month.

The assets on balance sheet of a bank shows for what purposes it has used its funds. A bank has to operate in a way so it can make reasonable profits. But in order to meet the demands for withdrawal by the public and to retain faith and credibility, it has to keep some cash ready with it (means liquidity).

Profitability and liquidity are two main considerations that a commercial bank has to keep in check (or mind) while deciding about the composition of its assets.

If all of its deposits are kept in the bank in the form of cash, it will have perfect liquidity but it will not make profits.

If the bank advances all its deposits as long term loans to the industries or to other businessmen or firms it will lose liquidity and will not be able to fulfill the demand of the depositors.

So, a bank has to keep an asset structure (a combination of various types of assets) that balances its liquidity and profitability.