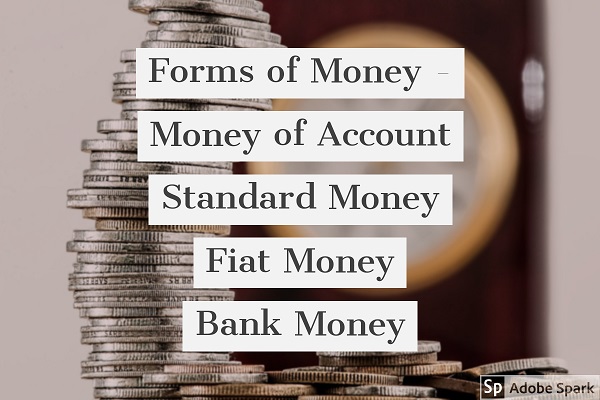 A currency is limited legal tender when there is a limit of amount which can be paid through it.

A currency is unlimited legal tender when any amount of debts can be paid by it.

For example, in India, rupee coins, half rupee coins and rupee notes are unlimited legal tender.

A Government has the power to take away the legal tender quality of a currency.

It is the money in which the value of all goods and all other forms of money are measured. For example, in India, prices of goods and services are expressed or measured in terms of rupee. All other forms of money such as five rupee note, twenty rupee note, one hundred rupee note, five hundred rupee note etc. are all measured or expressed in terms of rupees. So, Rupee is the Standard money of India. Standard money has always made the money an unlimited legal tender.

In the old times the standard money was ‘full bodied money’, which means, its face value was equal to the real or intrinsic value of the metal it contained.

But now in the modern time, almost all countries in the world, all the standard money is just a Token Money, which means, the material contained in it is very much less or nearly none than the face value written on it. For example, rupee in India, in the form of paper notes has no intrinsic value. Rupee coins also has a very less metallic value than its face value.

When the money was in the form of commodity such as gold or silver it had an intrinsic value because of its alternative uses.

The paper money such as currency notes is just a token money because it has no intrinsic value it is just a printed paper worth nothing. Government can take its quality of a legal tender whenever it wants. But this is not the case with the money which has an intrinsic value such as gold or silver.

The Paper money is not backed up by gold or silver and is generally acceptable as a medium of exchange and for settlement of debts, paper money is fiat (legal tender) of the Government. A country’s government or the Central Bank of a country issues the paper money as a legal tender by passing a law to this effect. That’s why it is a legal tender.

Demand deposits or simply deposits with the bank are usually called Bank Money. Bank deposits are created when someone deposits money with the bank. Banks also creates deposits when they issues loans to individuals or businesses or firms.

1. Demand Deposits – These are the deposits which are payable on demand without any prior notice to the bank.

2. Time Deposits – These are the deposits which have a fixed term of maturity and are not withdrawable on demand.

Only the demand deposits can serve as a medium of exchange as they can be transferred from one person to another person by issuing or drawing a cheque to them and vice versa.

Latest form of money is the credit cards issued by the banks for purchasing anything with just a swipe of the credit or debt card, without actually or physically using money.