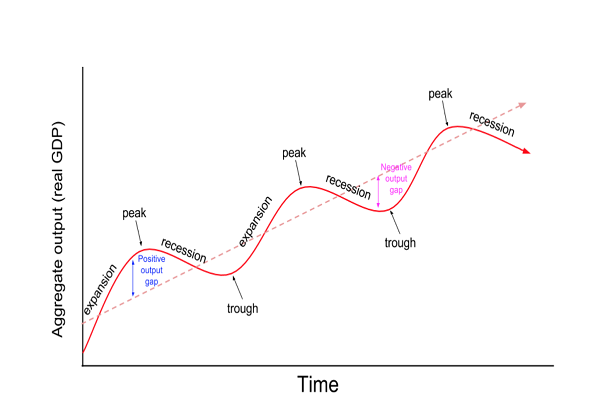 R.G. Hawtrey’s Monetary Theory of Business cycles is based on the Gold Standard Economy.

An economy is said to be under gold standard when either money in circulation consists of gold coins or when paper notes in circulation are fully backed by gold reserves in banking system.

According to Hawtrey, increase in the quantity of money raises the availability of bank credit for investment.

This increase in supply of bank credit causes rate of interest to fall. Which in turn induces businessmen to borrow more for investment in capital goods and to increase inventories of goods.

Lower rate of interest will lead to the expansion of goods and services as a result of more investment in capital goods and inventories.

This investment will lead to higher output, higher employment and higher income, which  will increase the spending on consumer goods.

So, as a result of more investment made possible by increased supply of bank credit economy moves into the Expansion Phase. This process of expansion continues for some time. Increase in aggregate demand brought by more investment also causes prices to rise. Rising prices leads to the increase in output in two ways.

First, when prices begin to rise businessmen think that they would rise further which induces them to invest more and produce more to get more profits (because profits increases when prices increases).

Secondly, rising prices reduces real value of money with the people which induces them to spend more on goods and services. In this way rising prices sustain expansion for some time.

According to Hawtrey, This expansion process must end at some point. Rise in income during the expansion phase induces more expenditure on domestically produced goods as well as imports of foreign goods. He further assumes that domestic income and output expands faster than foreign output. As a result, imports of a country increases more than its exports causing trade deficit with other countries. If exchange rates remains fixed. (trade deficit means there will be outflow of gold to settle its balance of payments deficit.)

Since the country is on gold standard, outflow of gold will cause reduction in money supply in economy. The decrease in money supply will reduce the availability of bank credit. Reduction in the supply of bank credit will cause the rate of interest to rise. Rising interest rate will reduce investment in capital goods. Reduction in investment will cause the process of contraction to set in. As a result of reduced order for inventories, producers will cut down production which will lower income and consumption of goods and services. In this state of reduced demand for goods and services, prices of goods will fall. Once the prices begin to fall businessmen begin to expect that they will fall further. In response to it traders will cut order of goods, which cause further fall in output. The fall in prices also causes real value of money to rise, which induces people to hold more amount of money with them. In this way contraction process gets momentum as demand for goods start declining faster and with this economy goes into depression.

But after some time this depression will also come to an end and the economy will start to recover. This happens because in the contraction process imports fall rapidly due to decrease in income and consumption of households, whereas exports do not fall much. As a result a trade surplus emerges which causes inflow of good. This inflow of gold leads to the expansion of money supply and consequently availability of bank credit for investment. With this economy will recover from depression and move into the expansion phase. Thus, the cycle is complete. But the process will go on.

Hawtrey’s theory is based on economy under gold standard and fixed exchange rate system which makes it self generating as there is built in tendency for the money supply to change with the emergence of trade deficit and trade surplus which causes movements of gold between countries and affects money supply in them. Changes in money supply influence economic activity in cyclical manner.

However, Hawtrey’s theory does not apply to the present day economies which have abandoned gold standard in 1930s.

But Hawtrey’s theory still retains its importance because it shows how change in money supply affects economic activity through changes in price level and rate of interest.

In modern monetary theories of trade cycles this relation between money supply and rate of interest plays an important role in determining the level of economic activity.

Key points of the Theory –

Based on Economy under Gold Standard and Fixed exchange rates.

Gold standard was abandoned in 1930s.