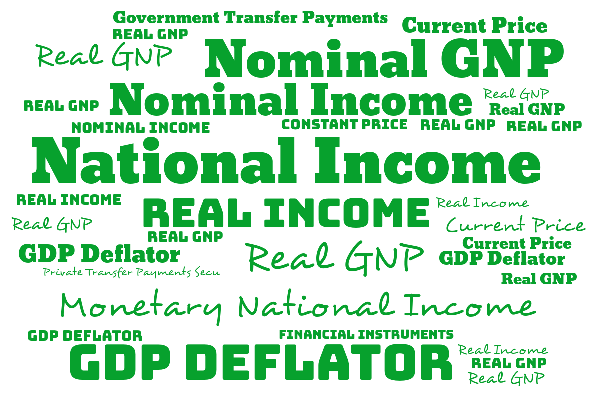 When the national income is calculated on the basis of base year price index, then it is called National Income at Constant price.

It fluctuate due to the fluctuations in the flow of goods and services, while the price remains constant, that’s why it is called Real National Income.

It fluctuates due to the fluctuations in the flow of goods and services along with the prices of the commodity, that’s why it is called Monetary or Nominal National Income.

# GNP – GNP (Gross National Product) is a measure of national income.  It is the market value of all goods and services produced in a given year.

This means that we could make the exact same number of goods and services this year as we did last year but we could still see GNP rise if the prices of the goods and services rose, It would look like the economy is growing because of increased GNP, but in reality, the only thing that happened was an increase in prices (inflation).

To avoid this problem, we use the GNP deflator. It shows how much prices have risen since a base year.

# Real GNP, shows what our GNP is after adjusted for inflation.

When final goods and services included in GNP are valued at current MP, is called Nominal GNP or GNP at current MP.

Current MP the price prevailing in the year for which GNP is being measured.

When final goods and services included in GNP are valued at constant prices, then it is called Real GNP or GNP at Constant MP.

Constant MP is the price of the base year of commodities.

The GNP deflator is a price index that is used to adjust GNP for inflation.

Greater the difference between nominal and real GNP, greater is the inflation. Greater the GNP Deflator.

GNP deflator measures the average level of the prices of all the final goods and services that are produced within the domestic territory of a country including NFIA.

GNP Deflator is the ratio of nominal GNP to real GNP, multiplied by 100.

Green GNP is the adjusted GNP for the loss of value due to environmental degradation, depletion of the natural resources, caused by the overall production activity in the country or economy.

@ Activities excluded from GNP at MP –

Government transfer payments are the Payments for which no goods and services are provided in exchange. So these are not included in GNP.

This is the transfer of money from one person to another without an exchange of goods and services, so this also isn’t included in GNP.

E.g. – pocket money given by parents to their children, money given in gift in relations etc.

3. Buying and selling of securities –

Trading in financial instruments such as bonds and shares does not imply production of final goods or services, so such transactions are excluded from GNP.

Buying and selling in financial instruments is just the transfer of ownership right.

Non market goods and services are those which are not acquired through the regular market transactions. So GNP can’t include such transactions whose value cannot be measured in monetary terms.

Activities such as painting, gardening etc are not included in GNP as their aim is not to earn money.

Income generated through illegal activities such as gambling, black marketing etc are not included in GNP because such income is not legally accountable.

Intermediate goods that are used to produce other final goods are not included in GNP.

# Sales of goods that were produced outside our domestic borders are also not included in GNP.